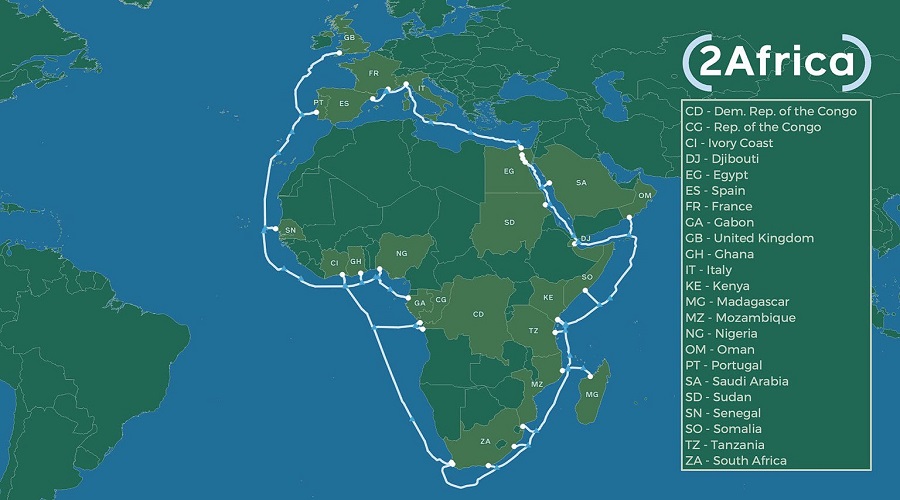 Facebook has reportedly committed more than $1 billion to the development of a new sub-sea cable link designed to improve connectivity in Africa, and connect more people to the internet - and subsequently, connect more users to Facebook.

The plan's part of Facebook's broader mission to connect with world, with over 3.5 billion people reportedly still unable to access the internet.

"Africa is currently the least connected continent, with just over a quarter of its 1.3 billion people connected to the internet. As part of our commitment, we’re proud to announce that Facebook has partnered with leading African and global operators to build 2Africa, the most comprehensive subsea cable to serve the African continent and Middle East region. A transformational cable, 2Africa is one of the largest subsea cable projects in the world and will interconnect 23 countries in Africa, the Middle East, and Europe."

Facebook additionally notes that the new cable link will be 37,000 kilometers long - "nearly equal to the circumference of the Earth" - and will provide almost 3x the total network capacity of all the subsea cables serving Africa today.

Bloomberg has subsequently reported Facebook's billion-dollar commitment to the project, though Facebook has not officially confirmed that figure.

Given the scope of the project, however, that cost makes sense, and added to Facebook's recent $5.7 billion investment into Indian internet provider Jio, that takes The Social Network's commitment to connecting the next billion-plus users to almost $7 billion in the last month alone. For context, the GDP of most small island nations is less than $7b.

The core message that Facebook would like to communicate here is about the societal value the project will provide - by connecting the world, Facebook is essentially playing a role in facilitating broader opportunity, and democratizing access to information, in order to help usher these regions into the modern age. And that's true, providing access to the internet will be hugely beneficial in many ways - but of course, Facebook itself is also very likely to see significant benefit from the same.

Based on current figures provided by Facebook, some 2.99 billion people currently use at least one of Facebook's apps every month. The population of the entire world is, according to Worldometer, around 7.8 billion, so when you take into account the aforementioned stat that 3.5 billion can't access the web, and add to that the fact that 1.4b Chinese citizens are technically unable to use Facebook due to government restrictions, Facebook's apps, based on these calculations, are used by pretty much everybody who's able to access them, in some form.

Of course, these figures are not 100% - the data is based on best estimates and varying inputs, which makes them fallible in definitive terms. But in general, as you can see, where people can access Facebook, Instagram, Messenger and/or WhatsApp, they are doing so.

Not every single person would fall into this category, so you might know people who don't use Facebook apps at all, which could be enough to cast doubt over these numbers. But, in general, Facebook's user penetration is incredibly high in regions where its apps are available.

Given this, you can see why Facebook's keen to maximize its presence in India, and its reach among that nation's 1.4 billion people. And now, it's also putting a plan in place to branch into Africa, adding even more potential users to its ranks.

"This expanded capacity will facilitate a healthy internet ecosystem by enabling greatly improved accessibility for people and businesses alike. We have seen firsthand the positive impact that increased connectivity has on communities, from education to health care. We know that economies flourish when there is widely accessible internet for businesses."

Facebook, too, flourishes with increased business activity, and while the project won't ensure that Facebook is the main platform adopted as a result of wider connectivity, that, inevitably, will be the result.

That could also facilitate new, expanded opportunities for businesses, and in combination with Facebook's advancing payment processes (Libra's still not looking great, but Facebook Pay is continuing to advance), that could enable much broader opportunities for borderless commerce, and a true global marketplace.

The benefits of the project are significant, in many ways, but make no mistake, Facebook's investment is not altruistic in any sense. It's the next small step in expanding the Zuckerberg empire.